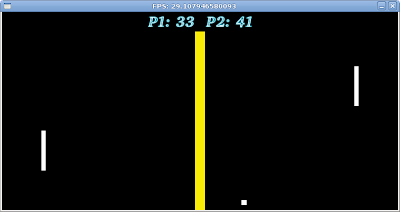 The above is a screenshot of the game, Pong, which I discussed in my last post.
Posted by Robert Pyke at 12:55 PM 1 comment:

I have just finished writing Pong, my first full featured game, in Rubygame.
On top of just the normal Pong action, I have added sound effects and background music.

Giving credit where credit is due:
The main tutorial I used to learn how to create Pong was from the "Rubygame Book". It is an excellent starting tutorial. It explains a lot of the initial framework setup.

The background music is from the Rubygame samples. These can be found with the latest release of Rubygame.

The sound effects are from http://freesoundfiles.tintagel.net/Audio/

Questions?
Feel free to ask any questions you may have regarding the source code, or other ruby related issues you may have.

I have just completed my first mock game in rubygame (ruby's version of pygame), and I can't recommend it enough. That said, I did have a few troubles setting it up. The following describes how to setup rubygame in Ubuntu 8.04 (this is likely to work with other recent Ubuntu releases):

and that you should, but don't have to have:

I found that I had to have the last 4 SDL libraries to install the rubygame gem.

To get the required SDL libraries for rubygame, I installed the following packages via apt-get

Once that was complete, I installed the gem. To install the gem, you must be in a terminal at the directory in which the gem is located. You cannot be in another directory, if you are, it won't find the gem.

To install the gem, I did the following:

If you did not receive a gem "install failed" message, you are ready to use rubygame. If you did, read the error message, I found that the error message named the libraries I was missing. An example of an error I received was, "could not find file SDL_IMAGE.h". This error meant that I was missing the libsdl-image1.2-dev package.

The following is an example ruby program you can use to test your rubygame install. Note this is the entire file contents. If your ruby install worked, the app will run, opening a window titled "Hello World".