Ruby: Adding the comparison operator (<=>) to the Symbol class

I'm working on some Ruby at the moment.
The code I'm writing uses hash maps and arrays to store word associations. To lower my memory usage, I decided to use symbols. Using symbols means all uses of the same word only use the one symbol worth of memory, instead of using a string worth of memory per word.

The code above injects a <=> (comparison) method into the Symbol class. The <=> method simply converts the symbols that it is comparing to strings, and then calls the string <=> method.

Note: I wrote the <=> method for my own purpose, to sort my symbols alphabetically. You could have just as easily written a method which compares symbols based on their length.

I have just spent the past long weekend on a coding binge, 20+ hours of lovely Ruby. The end result is a tower defence "game" with easy to use base classes, making it easy for anyone to add a level, a tower or even a new bullet type. The "game" is in a playable state, and anyone who his familiar with rubygame should check it out. The "game" is available via GIT.

The following is a screenshot of ruby-tower-defence in action: 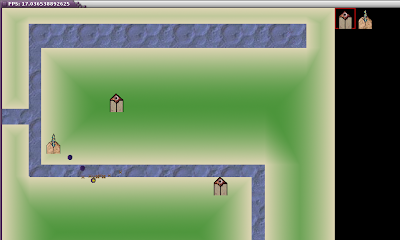