I've been spending a little bit of time working with Android lately. The following is a sneak peek at an app I'm working on. I hope to have it added to the Android market place by the end of this weekend (free app). The app's name is Ohmage, however for stuff and giggles, I may change the name to Pure Ohmage. I should mention that I hope to also have several other features added before I release Ohmage.

N.B. You may notice the resistor image is very coder-art-ish. The image will be updated before I release Ohmage. 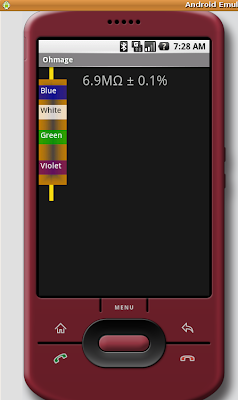 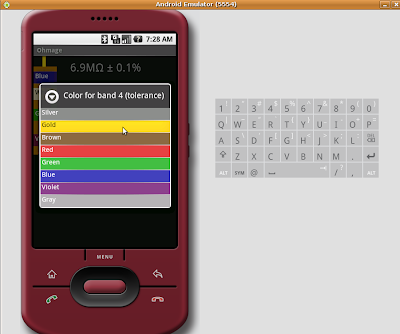 For anyone wanting to know what the learning curve for Android is like, the following is my take on learning Android. I have been working with Android for about 10 hours now. Android programming with the Eclipse plugin is... pleasant :D. Android programs are written in Java and the event system is fairly similar to Java Swing. A lot of the heavy lifting is performed by the Android View, Activity and Adapter classes.
The Api Demos included with the SDK are the holy grail for learning Android. They provide excellent examples and clearly show how to perform your layout in xml, rather than in the raw code.
If you are considering learning Android, I highly recommend making use of the eclipse plugin and the Api Demos.
Posted by Robert Pyke at 7:32 PM

I have been meaning to look into Android development for quite some time, but have never got around to it.

It is good to hear about someone actually working on it and giving us all a clue about what is involved.